[Source: "High-tech LED" magazine October issue (total 58th issue) Text|Reporter Luo Shenghua] As a professional manager of LED lighting export enterprises with annual sales of over 100 million yuan, Mr. Xiao has been in the past eight months. He has been running non-stop between the business negotiation table and the production line. With the perfect handover of the largest payment, Mr. Xiao finally took a break.

"With the 120 million yuan order signed with Carrefour, the customer has strict restrictions on the completion time of the project, and we still have a large number of orders piled up. In this case, we have to expand production capacity and strive to find some companies with strong production capacity. Collaboration." Mr. Xiao explained to the reporter of "High-tech LED" magazine. 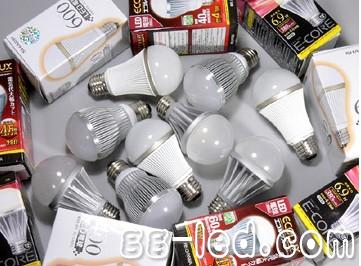 In fact, not only is Mr. Xiao suffering from the â€œsweetnessâ€ of this capacity and order quantity mismatch, but a large number of LED lighting companies that focus on export have the same feeling.

Driven by favorable policies, LED indoor lighting prices continue to decline, and companies have spared no effort to carry out terminal promotion and other factors, the domestic LED indoor lighting market maintained a high-speed growth in the first half of this year.

The amount of foreign lighting market also affects the overall performance of domestic export-oriented lighting companies. "High-tech LED" reporters found that the overseas export performance of the listed companies in the first half of this year showed an upward trend as a whole, and some enterprises even doubled.

One significant area of differentiation from the North American market <br> <br> export channels as the domestic LED lighting products mainly sales channels, most of the lighting business revenue was the main source markets. In the high growth period of exports, the proportion of exports once accounted for more than 80% of the total output value of LED. In recent years, with the rapid growth of domestic LED lighting applications, although the proportion of exports has declined, it still remains at around 70%.

However, although the domestic LED lighting products export market as a whole is improving, due to the sales base and the differences in national policies, the sales differences in overseas sales regions this year are also obvious.

In the first half of this year, the five major destination countries for domestic lighting companies to sell overseas were the United States, Japan, Russia, Germany and the United Kingdom.

At the beginning of the year, with the full implementation of the US â€œbanâ€ policy and the excellent sales of new homes, the overall economy and consumption power were warming up. In the first half of this year, the overall US lighting demand was strong.

It is understood that from January to May this year, domestic LED lighting products accounted for 17.52% of the US exports, an increase of 0.37 percentage points over the same period last year. The lighting industry in the United States is also changing strongly.

Like Weiwei, thanks to the favorable policies of North America, in the first half of this year, Sunshine Lighting's revenue in the North American market increased by 163.31% over the same period. Sunshine said that with the continuous improvement of technology and the continuous enrichment of product structure, the company maintained a good growth in North America and its market position is gradually strengthening.

Compared with the fiery market in North America, the Japanese market is the second largest exporter in the country after the United States. Although the overall sales base is relatively large, its total sales have declined compared with the same period last year.

"Since this year, the growth rate of the East Asian market has been slow, and some regions have even shown a downward trend. Like the Japanese market demand declines year-on-year, in addition to the conservativeness of the Japanese market, the greater reason may be affected by the policies of the two countries." Lin Junsong, general manager of Shenzhen Smither Optoelectronics, said.

GLII shows that exports to Japan in the first five months of this year accounted for 7.67% of exports, down 5.45 percentage points over the same period.

Compared with the relative decline in Japanâ€™s exports, it is worth noting that the traditional domestic export markets such as Europe have grown at a relatively stable pace. In addition, the export share of emerging export markets represented by Southeast Asia and Russia has further increased.

GLII shows that the proportion of domestic exports to Russia has increased by 7.37 percentage points, and it has become the third largest overseas exporter in China with great potential.

Specifications tolerance lower prices overall fell <br> <br> though, this year the overall volume in overseas markets LED lighting, but does not represent all domestic lighting will be excited, but some companies feel the pressure.

According to the reporter's investigation, with the increase of the global LED market, the price of LED products has also declined overall, especially for products suitable for circulation in bulbs, lamps, etc., and the decline in products is large.

In this phenomenon, some insiders commented that under the tide of global â€œprice reductionâ€ of LED lighting, if the overall production cost of the enterprise declines, the speed of the product sales price will not keep pace, LED lighting companies are likely to fall into insolvency. In the dilemma.

Li Chenghao told reporters that due to the impact of price turmoil in the domestic circulation field, especially small and medium-sized lighting enterprises represented by Zhongshan, they hope to absorb overseas buyers with â€œpure priceâ€. With the increase of available suppliers, overseas procurement Businesses have pushed down procurement costs.

"According to the company's previous development speed, we set the growth rate of sales to 100% at the beginning of the year, but the actual growth rate is only 40-50%. From the current fierce market competition, the company has to achieve the goal of 100% growth rate. The pressure on sales staff is relatively large." Li Chengyu explained to reporters.

For the downward trend of the price of LED lighting products in overseas markets, Li Wei believes that with the start of the sales market, the price competition of products is an inevitable phenomenon.

â€œOverseas markets are very sensitive to price, but at the same time, overseas markets have changed their specifications and technical solutions to a certain extent.â€ Li Wei clearly stated that overseas customers have tolerance for product requirements. Elevated, under the condition that the product is completely equal, the price decline will certainly not change much.

Li Guang also agrees with the above viewpoint. â€œDifferent companies have different requirements for purchasing products. For big-name companies like Philips and Osram, they definitely have a systematic understanding. The price is one aspect to consider, but more will be from suppliers. Comprehensive strength considerations."

"I think that in the case of the same type of products, the decline of LED lamps is between 20-25%, and the purchase price of customers is roughly in the range of 10-15%." Li Wei stressed.

Industry concentration is the key to improving product technology <br> <br> accompanied by sustained heavy overseas lighting market in the first half of this year, subject to the constraints of domestic and foreign regulatory situation is increasingly urgent, energy efficiency indicators and eco-design is becoming the main tone. The new regulations of the LED lighting industry have swept through the barrier effect and become a hidden risk factor.

A more notable example is the US Department of Energy's new energy testing program for LED bulbs, which clarifies methods for measuring lumen output, input power, and relative spectral distribution. The Taiwan region has implemented mandatory inspection of LED bulbs since July, and the test items include safety. Performance and electromagnetic interference, etc., and impose a fine on those who have not been tested and sold on the market and verified to be true.

In addition, from January to July this year, only RAPEX (EU non-food consumer goods rapid warning system) has 54 notifications for Chinese-made lighting products, which has sounded an alarm for domestic export-oriented enterprises.

â€œMany companies regard export certification as a huge cost pressure. In fact, this is precisely the process that industry norms must undergo. The improvement of the competition threshold will play an important role in the industry's regulation, which is also the current industry concentration. The main reason is getting higher and higher.â€ Li Wei believes that with the gradual increase of industry concentration, there will be more and more large-scale suppliers to choose from, which is necessary to create a fair and orderly competitive environment.

In fact, with the improvement of the competition threshold and the change of market demand, the competition among export-oriented enterprises will inevitably gradually transition from â€œpriceâ€ competition to comprehensive competition such as cost performance and after-sales service.

"At present, the LED industry has not yet fully stereotyped from the technical to the product aspects. The enterprises can be described as 'eight immortals crossing the sea and showing their magical powers'." Li Wei explained humorously.

As Li Wei said, from the perspective of future industrial development, it should be a big wave of sand and the survival of the fittest. Many companies that survive today will be eliminated. The current merger and reorganization trend will continue in the future. In the future, a group of enterprises with strength and scale will be formed. The final pattern of the export-oriented lighting market will be a game between large enterprises.

The leader of Wei Wei, represented by Li Wei, clearly agrees with this trend. It is understood that in order to compete for the dominant position in the overseas market in the future, Weiwei shares plans to acquire European L&D company for no more than US$10 million to expand its market position in the European market.

SCOTECH manufactures a full range of oil immersed power transformers including generator step up transformer, substation step down transformer, mobile Substation Transformer and other different types, our maximum capacity and voltage is up to 300MVA 330KV, with the advanced design and thorough quality management system, we had become one of the most reliable Power Transformer manufacturers in China. we do not compromise on the quality, we ensure that each one of our delivered units has passed the most strictly testing and that makes us confidently to provide the longest quality warranty to our customers. We export our power transformers to all major global markets.