The main structure of the conventional AC input switching power supply can be divided into four parts, and its block diagram is shown in Figure 1.

Generally, the switching power supply is capacitive filtering, and the electromagnetic noise in the input and rectification filtering sections is mainly caused by current spikes and voltage fluctuations caused by the rectification process. After the sine wave power supply is subjected to differential mode and common mode signal attenuation by the power supply filter, the voltage obtained by the rectifier bridge rectification and electrolytic capacitor filtering is used as the input voltage of the high frequency inverter part. Due to the presence of the filter capacitor, the rectifier is not turned on for half a cycle like pure rectification, but only when the sinusoidal voltage is higher than the capacitor voltage, causing the current waveform to be very steep and the voltage waveform to be gentle. The waveforms of current and voltage are shown in Figure 2.

According to the Fourier series, the current and voltage waveforms in the figure can be decomposed into a DC component and a series of sinusoidal AC components whose frequencies are integer multiples of the fundamental frequency. The electromagnetic field theory and experimental results show that harmonics (especially higher harmonics) can cause conducted and radiated interference. The interference formed by the propagation of the input and output lines of the switching power supply is called conducted interference, and the interference generated by the external electric field generated by the external magnetic field in the space is called radiation interference. 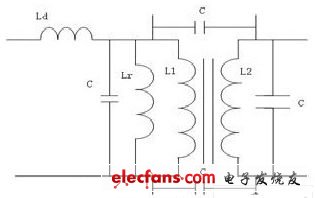 The fundamental reason for the reduction in the size and weight of the switching power supply is to operate the power semiconductor device in a high frequency switching state, but the result is a very serious electromagnetic interference. The reason is high di/dt and dv/dt during the working process, as well as transformer leakage inductance, high frequency oscillation between the parasitic inductance of the circuit and the parasitic capacitance of the switching transistor. The voltage waveforms in the switching power supply are mostly periodic waves close to a rectangle, such as the driving waveform of the switching transistor and the MOSFET drain-source voltage waveform. The frequency is high, generally above kHz, the rise and fall times are short, dv/dt is large, and after the Fourier expansion, the harmonic frequencies involved are very high, and it is easy to pollute the surrounding electromagnetic environment.

Switching tubes (such as MOSFETs) can also cause strong electromagnetic interference when turned on and off. Due to the leakage inductance of the primary coil of the transformer, the parasitic inductance of the circuit causes a part of the energy to be transmitted from the primary side to the secondary side. The energy is stored in the leakage inductance, and the current suddenly changes when the power is turned off, and the di/dt is very high, generating a counter electromotive force. It is known from the electromagnetic field theory that E=-Ldi/dt.

Its value is proportional to the change in current and proportional to the inductance. Therefore, the leakage inductance will produce a very high back electromotive force superimposed on the turn-off voltage, forming a turn-off voltage spike, causing conductive electromagnetic interference. The leakage inductance and the parasitic capacitance between the switching tubes may also oscillate, affecting the electromagnetic environment in the circuit and generating noise. When the switch is turned on, the parasitic capacitance is instantaneously discharged, causing a spike current, and the primary coil also causes a surge current to be generated, which affects the electromagnetic environment.

When the diode is subjected to a reverse voltage, the accumulated charge in the PN junction will be released and form a reverse current. The magnitude, pulse width and shape of the reverse recovery current pulse are related to the characteristics of the diode itself and the circuit parameters, and the time to return to zero. Related to factors such as junction capacitance. Due to the large amplitude and di/dt of the reverse recovery current pulse, the high-frequency rectifier diode generates a high induced voltage in the lead inductance and the circuit connected thereto, resulting in a very wide-band transient electromagnetic noise. The voltage and current waveforms of the diode reverse recovery process are shown in Figure 4.

Fast recovery diodes are used in converter circuits with high switching frequency, such as high-frequency switching power supplies, high-frequency DC/DC resonant converters, and power factor correction circuits. Their reverse recovery time is usually on the order of nanoseconds, so transient electromagnetic noise caused by lead inductance is not negligible. Especially in the flyback switching power supply, the diode reverse recovery current spike may also pass from the secondary to the primary. When the switch is turned on, a current spike is formed, which not only easily burns the switching tube but also causes electromagnetic noise.