However, the switching power supply has poor transient response and is prone to electromagnetic interference (EMD, and the EMI signal occupies a wide frequency range and has a certain amplitude. These EMI signals pollute the electromagnetic environment through conduction and radiation, to communication equipment and electronic instruments. This causes interference and thus limits the use of switching power supplies to some extent.

According to the working principle of the switching power supply, the switching power supply first rectifies the commercial frequency alternating current into direct current, and then inverts into high frequency alternating current, and finally rectifies and filters the output to obtain a stable direct current voltage. In the circuit, the power transistor and the diode mainly work in the state of the switch tube, and work in the microsecond order; during the turn-on and turn-off process of the triode and the diode, the current changes greatly during the rising and falling time, and the RF energy is easily generated. Source of interference. At the same time, potential electromagnetic interference is also formed due to the leakage inductance of the transformer and the spike caused by the reverse recovery current of the output diode.

Therefore, the interference sources in the switching power supply are mainly concentrated in voltage and current changes, such as switching tubes, diodes, high-frequency transformers and other components, as well as AC input and rectification output circuit parts.

2.2 Using the absorption loop to improve the switching waveform

During the turn-on and turn-off of the switch or diode, due to the transformer leakage inductance and line inductance, the diode storage capacitor and distributed capacitance, it is easy to generate a spike voltage at the collector, emitter and diode of the switch. The RC/RCD absorption loop is usually used, and the RCD surge voltage absorption loop is shown in Figure 2. 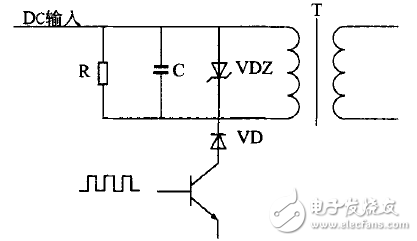 When the voltage on the absorption loop exceeds a certain range, the devices are quickly turned on, thereby venting the surge energy and limiting the surge voltage to a certain amplitude. The saturable core coil or the microcrystalline magnetic bead is connected in series on the positive electrode lead of the collector of the switch tube and the output diode, and the material is generally cobalt (Co). When the normal current is passed, the core is saturated, and the inductance is small. Once the current flows in the opposite direction, it will generate a large back EMF, which effectively suppresses the reverse surge current of the diode VD.

The frequency control technique is based on the energy of the switching interference, which is mainly concentrated on a specific frequency and has a large spectral peak. If these energy can be dispersed over a wider frequency band, the purpose of lowering the peak of the disturbance spectrum can be achieved. There are usually two methods of processing: the random frequency method and the modulation frequency method.

If a small resonant component such as an inductor or a capacitor is added to the switching circuit, an auxiliary network is formed. Leading the resonance process before and after the switching process, the voltage is first reduced to zero before the switch is turned on, so that the phenomenon of voltage and current overlap during the opening process can be eliminated, and the switching loss and interference can be reduced or even eliminated. This circuit is called a soft switching circuit. .

Generally, electromagnetic shielding measures can effectively suppress electromagnetic radiation interference of the switching power supply. The shielding measures of the switching power supply are mainly for the switching tube and the high frequency transformer. When the switch tube works, it generates a large amount of heat, and it needs to be equipped with a heat sink, so that a large distributed capacitance is generated between the collector of the switch tube and the heat sink. Therefore, an insulating shielding metal layer is placed between the collector of the switching tube and the heat sink, and the heat sink is connected to the casing, and the metal layer is connected to the zero end of the hot end to reduce the coupling capacitance between the collector and the heat sink, thereby reducing Radiation interference from the heat sink. For high-frequency transformers, the magnet-conducting structure should first be selected according to the shielding properties of the magnetizer. For example, the can-type iron core and the El-type iron core have good shielding effect of the magnetizer. When the transformer is shielded, the shielding box should not be placed close to the transformer, and a certain air gap should be left. If a multilayer shield with air gap is used, the resulting shielding effect will be better. In addition, in high-frequency transformers, it is often necessary to eliminate the distributed capacitance between the primary and secondary coils, and an open-loop ring made of copper foil can be placed between the coils along the entire length of the coil to reduce the disaster between them. In combination, this open circuit ring is connected to the iron core of the transformer and to the ground of the power supply to provide electrostatic shielding. If conditions permit, install a shield on the entire switching power supply, which will better suppress radiated interference.